Rather than just another five-day exhibition at Salone de Mobile, this year designer Tom Dixon decided to make his mark on Milan a little more permanent. His Design Research Studio created The Manzoni, a restaurant that doubles as a showroom. Incorporating Dixon’s three new collections, The Manzoni—named for its location at 5 Via Manzoni—elevates the products from simply being on display to functioning in an active environment. The 100-cover, 5,000-square-foot restaurant will officially open to the public in May – however it has enjoyed great popularity during Milan 2019 as a destination to check out Tom Dixon’s latest. Interestingly enough, the bathroom became the most instagram’d spot of the entire event! 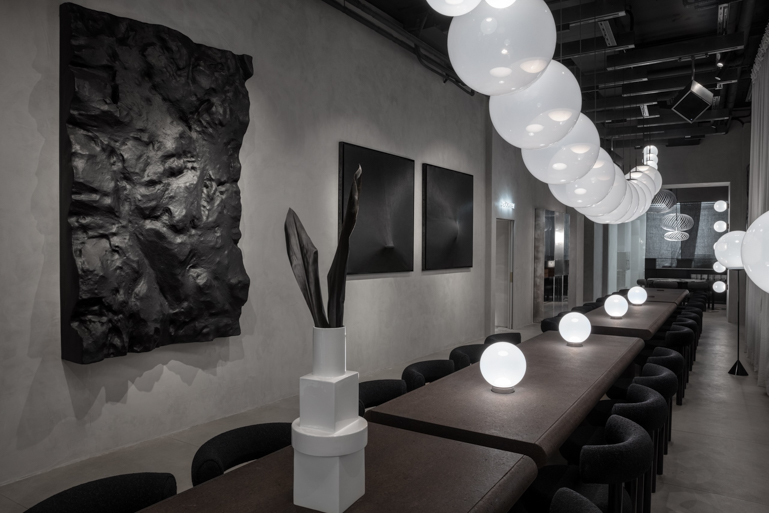 Dixon noted that after putting so much energy into creating pop-up exhibitions, his company sought to be a fixture in Milan. “With the city being so active and engaging right now, it is the right time to forget being temporary and build something permanent,” the designer said. “And just like in London, we don’t think it’s enough to just have a showroom. We need a place where people slow down and experience our products in a live setting.”

Shown off at The Manzoni, Tom’s new collections include Fat, an upholstered seating line; Spring, a series of pendant lamps; and Opal, a spherical lighting collection echoing art-deco architectural styles. In the restaurant, these elements work to soften the space and balance the bass notes of concrete and marble. The Manzoni’s central space, called The Dining Hall, features a massive “monastic Italian” dining table illuminated by a sequence of Opal globes, accompanied by Fat dining chairs. Guests will be able to enjoy dinner entrees such as Sicilian-style ring-shape pasta with roasted eggplant, tomato and ricotta and boneless duck leg braised in Lambrusco wine.

Beyond the Dining Hall, another room called The Jungle welcomes guests into a space filled with ferns, Spanish moss, orchids, and all manner of greenery. This is where Dixon’s Spring brass pendants really shine (pun intended!). The Bar & Lounge features a graphic wall of stone tile in deep gray and pale green along with Dixon’s Fat lounge chairs and bar stools and Opal and Melt lights. 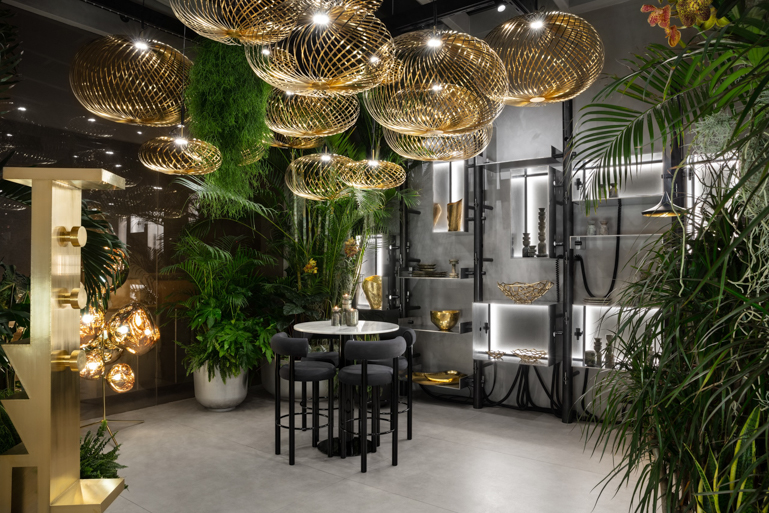 Tom Dixon’s Spring pendants above, Mass book stand on the right and Fat bar stools in the middle.