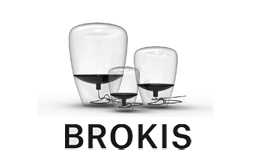 The Czech premium lighting brand Brokis stands for the integration of magnificent design, superior quality, and the remarkable craftsmanship of eccentric glass artisans. The company’s original lighting collections, designed by celebrated Czech and international artists, have achieved global acclaim and won multiple awards in distinguished design competitions – both in their home country and overseas. The company combines mouth-blown glass with other refined materials, such as manually pressed metal and wood, in daring lighting compositions that stretch the confines of modern design. The Brokis portfolio features modern functional lighting fixtures, decorative objects, and unique lighting solutions for architects and interior designers. With its own high-capacity production facilities rooted in more than two hundred years of history, Brokis is free to experiment and develop innovative materials, techniques, and technologies as well as offer bespoke lighting solutions.

Brokis is the creation of successful Czech businessman and engineer Jan Rabell. In 2006, he founded the brand Brokis as a platform to enliven and elevate Bohemian glassmaking to new heights and preserve generations of knowledge and craftsmanship – essentially an endeavour to incorporate traditional techniques into a company’s production process and retail to the world. Nearly ten years prior, in 1997, he acquired the ailing Janštejn Glassworks, founded at the start of the 19th century approximately 140 kilometres southeast of Prague. Demand for traditional products had declined significantly, many of the glassmakers were growing old and leaving, and time-honoured technologies and techniques were at risk of being lost forever. Mr. Rabell’s vision was to restore the factory to its former glory and ensure that the age-old Bohemian glassmaking tradition survived well into the 21st century and beyond. With Brokis, Mr. Rabell created a lighting brand offering entirely different products than those previously produced at Janštejn Glassworks. Several new Italian-style furnaces were built, and production techniques were refined. Some, such as grinding and glass painting, were discontinued, and others were revived, e.g., glassblowing, optic moulding, and traditional hotshop techniques. Original and nearly forgotten formulas for manufacturing coloured glass were reinstated and are now characteristic of the Brokis brand. Brokis has firmly established itself as a leading innovator in glass lighting. For example, the complex technology applied in production of the Night Birds collection, which consists of imposing yet elegant curved glass silhouettes of birds in various phases of flight, required two years of experimentation to perfect. Today, Brokis and Janštejn Glassworks employ a total of 100 people and enjoy a unique symbiosis that has allowed Brokis to launch sales operations in 70 countries and showcase its renowned lighting collections at the world’s top design exhibitions.

Brokis art director Lucie Koldova is an acclaimed Czech product and furniture designer. Her collaboration with Brokis started in 2010 with the timeless Muffins and Balloons lighting collections, which she designed while living and working in Paris. Dan Yeffet, born in 1971 in Jerusalem, Israel, is an internationally recognized designer whose work can be seen in eminent institutions in North America and Europe, such as the New Design Museum in Chicago, the Museum of Art’s ‘Visual Delight’. Boris Klimek (born 1984) is an esteemed product designer who has received numerous distinguished awards for his work. He graduated from the Academy of Arts, Architecture & Design in Prague and undertook internships at Sheffield Hallam University.

We take our newsletters very seriously and promise to only send you quality useful information. No spamming. Promise!